An apple illustration from 2020 – decades after many of the illustrations for this post. For Part 2, go to Table of Contents and find Post #58.

AN ILLUSTRATION FROM A LINE OF PACKAGING. THE TECHNIQUE I UTILIZED WAS MARKERS.

I am going to start to open up some old job files on this illustration blog. Since I love puns, here comes a few: I’m going to share some “hard-core” tips. Okay, I know that was bad. Well, I’m typing this on my Macintosh. Ouch!

I am sharing the estimate for this assignment that I worked on in 2001. I worked with a design firm in New York.

In the illustration industry, the usage is very important to spell out clearly. My estimates also include a description of the illustrations requested, the client, the rights, the schedule, and payment details.

I always retain my copyright. I rarely give an exclusive, however, with the advent of stock – more and more clients insist on this.

I specialize in illustrating labels for the packaging industry. When I talk about an illustration being a puzzle to solve, it truly is. There are perimeters for where the illustration will fit. Every leaf and droplet must be placed accordingly.

Therefore, I am including a look at the sketches for the apple illustration on the line of labels I did for this company.

I often start out with A-E, and end up working from one of those into another group of sketches. Once those are narrowed down, I might do another few after that.

I always avoid “tangents.” An example of a tangent would be where an object might touch the edge of the label, or meet another object at the same angle. What I like to do with my sketches is give the art director a range of options.

The cropping into the label format is very important. Therefore, I include an uncropped sketch, as well as one in position.

Since these labels were done nine years ago, I was not using a computer at that time. I had an extensive file of drawings that were photocopied. I actually used an exacto knife to cut out the apples and leaves and move them around into compositions that worked for me. I created a “window” of the actual label with type, and made sure that I liked the placement of all the items. Then I made copies of everything in position.

Now that I work digitally, this process is gone. I create my comp in color, and move everything into position on the computer. It is much faster, and working in color is very helpful in visualizing the design!

The more preliminary work that is done and approved, the better. I never want to start my illustration without having a clear direction. 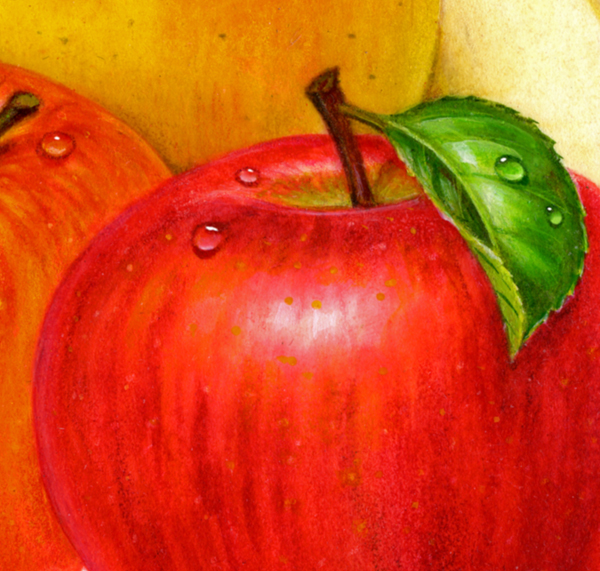 A CLOSER LOOK AT THE ILLUSTRATION.

LATER ON, I DIGITALLY SEPARATED OUT A SINGLE APPLE FOR STOCK USAGE.

ONE OF MY TYPICAL, RED DELICIOUS APPLE WITH LEAF & DROPLETS (ILLUSTRATION (FOR STOCK USAGE)

As a food illustrator, there have been times that I have even considered myself a “fruit specialist.” Talk about finding a niche! As if it weren’t enough that I already had a post about apples, I thought I’d revisit it again with an emphasis on one particular client I had.

I have illustrated a lot of apples – most commonly the Red Delicious variety. Below are some labels and illustrations with examples of those.

A LABEL FOR NORTHLAND CRANBERRIES THAT INCORPORATED A RED APPLE.

THERE WERE APPLES IN MANY FLAVORS OF BEECHNUT BABY FOOD.

AN EXAMPLE OF APPLES USED ON OTHER LABELS I’VE DONE. 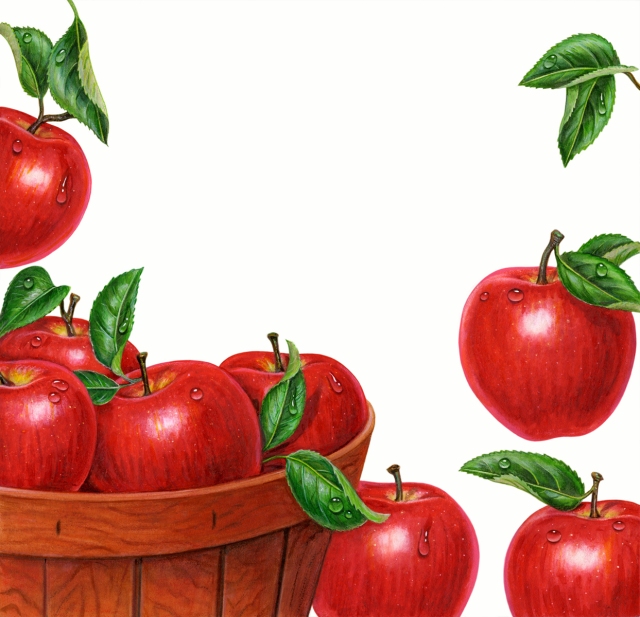 Part of what sustained my career for many years was continued business. Especially with packaging, new labels would often arise and consistency of illustrations worked in my favor. 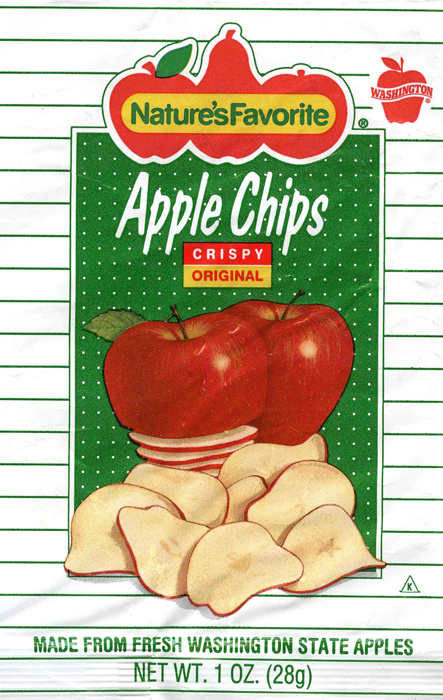 THE ACTUAL PACKAGE FOR APPLE CHIPS. IT WAS PRINTED DIFFERENTLY SINCE IT WAS AN INDIVIDUAL-SIZED PACKAGE.

I worked for the client “Nature’s Favorite” over a period of approximately, five years. Despite the theme of apples as my post title, I am also sharing some other labels that I did for them that were not apples.

These illustrations actually share a lot of my working process. It was quite different to this current time of reliance on computers. All line drawings were faxed for approval. I still remember when there were no fax machines, either. (There was “Zap Mail” through Fed Ex, too.) I have no original art or good transparencies to share of any of the final paintings. All I have are a few slides, and they are not of the best quality.

However, I have a whole lot of marker comps. My marker technique continued to improve over time and as I have shared, I eventually utilized it as a final technique when I didn’t have enough time to use my watercolor/dye technique.

One of the important aspects of my marker technique was the dynamic of “incompatibility.” What that means, is that I used different kinds of materials and/or markers and if they were “incompatible” it simply meant they did not affect the other.

Therefore, utilizing this process meant that I would illustrate the large areas of an apple with Admarkers or Prismacolor markers. These markers are suitable for large areas and blend well – a blender marker is extremely helpful.

It was also very important for me to mount my marker comps due to wrinkles. That can happen from a lot of added colored pencil or from using the water-based markers. If the comp is to become very wet, it was better to mount the paper first.

The slice edges and stems have thin edges that could only be done with a colored pencil or water-based marker. However, Prismacolor Pencils dissolve with solvent markers and are not be a good choice for those sharp areas – unless of course, it was done after those areas were finished. To create the sharpest delineation, I used a Tombo marker and sometimes a brush that lifted the marker color from an acetate palette.

When adding tone to the chip areas – incompatibility makes it easy to fill in those areas without any worry of bleeding from the dark edges of water-based marker. Adding dots of white highlights work very well with markers, unlike dye where color usually bleeds into them.

Because colored pencils can dissolve with the solvent markers, they are excellent for creating textures that can easily be erased or made subtler. Pencil dots on the apple, for example, are easily erased or blended away if they become too strong.

Lastly, sometimes to create very clean edges all around objects, I would actually cut out the thin marker paper and remount it. Some of these comps were mounted on acetate overlays, so that background gradation swatch choices could be visible underneath.

ART DIRECTOR’S LAYOUT FOR THE FIRST ILLUSTRATION OF THE SERIES OF LABELS THAT I DID FOR NATURE’S FAVORITE.

ANOTHER EXAMPLE OF FINAL ART TAKEN FROM A PRINT, A LOT OF DETAIL HAS BEEN LOST.

Another part of this job that was fun for me was the creative use of photography in creating the apple with slices. My inventive husband suggested a way to photograph this by using a large nail. We hammered it through the apple slices, and added small “separators” along the way. The result was actually a very helpful photograph!

MY FAVORITE PHOTO REFERENCE FOR THIS JOB. I “NAILED IT!”

After that, I was very familiar with the client’s requirements, and didn’t require photo-reference for subsequent flavors.

Most often the reason a food illustrator such as myself was used, was because products when photographed were rather “unappealing.” I see how the actual, dried chips would be considered such. 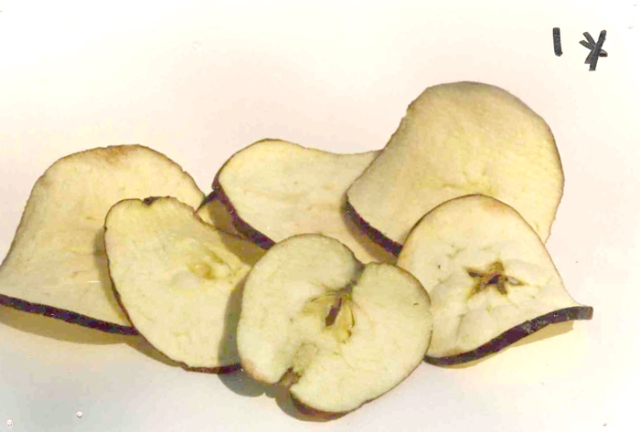 A PHOTO OF THOSE BEAUTIFUL CHIPS.

A PHOTO OF THE GOLDEN DELICIOUS APPLE CHIPS.

A PHOTO OF THOSE PEAR CHIPS. DOES IT MAKE YOU HUNGRY?

However, for me there was a beauty in their delicate curves and “star” centers. The art director and myself worked to create nice compositions, which incorporated a variety of the chip shapes that filled each package. Some were cut horizontally and some vertically, and that affected their shape. 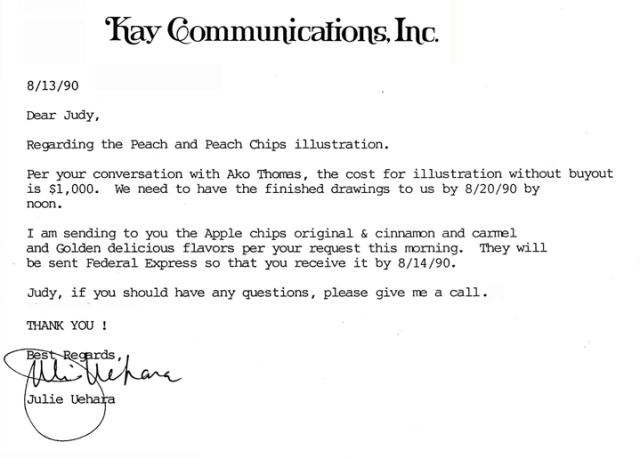 SOME CORRESPONDENCE REGARDING A CHIP JOB.

ART DIRECTOR’S LAYOUT FOR GRANNY SMITH APPLE CHIPS. THEY WERE TOO SOUR FOR ME!

A PURCHASE ORDER FOR THE GRANNY SMITH APPLE CHIP LABEL.

MY COLOR COMP FOR THE GRANNY SMITH CHIP LABEL.

MY COLOR COMP FOR THE GOLDEN DELICIOUS APPLE CHIP LABEL.

Initially, I created many packages of a variety of apple flavors for Nature’s Favorite. Later on, I illustrated a brochure for them. Something that I find humorous is the concept of “illustrating an illustration!” In this case, on the cover of their brochure I illustrated packages (which I illustrated) hanging on a tree. For the lettering on this illustration, I used the custom, rubdown letters again.

LAYOUT FOR THE APPLE CHIP BROCHURE.

MY COLOR MARKER COMP FOR THE BROCHURE ILLUSTRATION.

LAYOUT FOR THE APPLE CHIP BROCHURE

FINAL ART FOR THE BROCHURE ILLUSTRATION – HOWEVER, I REMOVED THE PACKAGING SO THIS COULD BE A STOCK ILLUSTRATION. 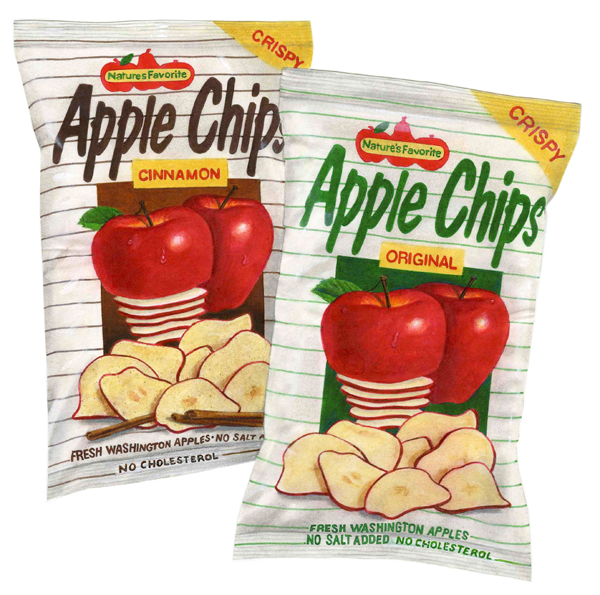 MARKER COMPS OF PACKAGES FOR ANOTHER BROCHURE ASSIGNMENT. THIS ILLUSTRATION WAS FOR THE “COUPON” AREA.

THE OUTSIDE OF THE ACTUAL BROCHURE. 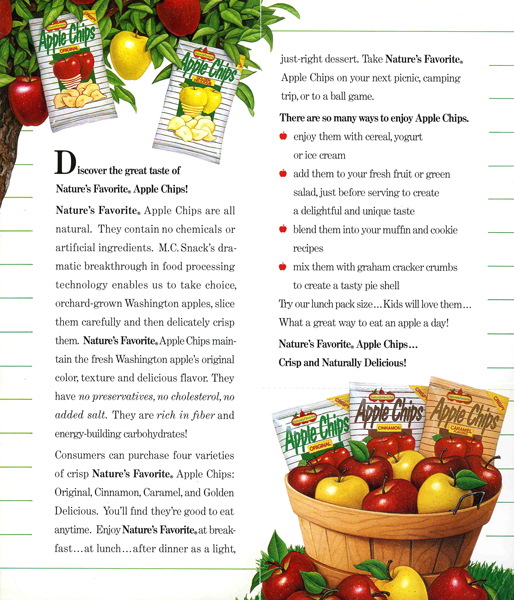 THE ACTUAL, PRINTED BROCHURE – THIS IS THE INSIDE.

My last illustrations for this company were Peach and Pear Chip labels, as well as an illustration that was used for a promotional sheet.

A SIMPLE LINE SKETCH TO FAX FOR THE PEAR CHIP LABEL.

A PURCHASE ORDER FOR THE PEACH AND PEAR CHIP LABELS.

MY COLOR COMP FOR THE PEAR CHIP LABEL.

A SIMPLE LINE SKETCH FOR THE PEACH CHIP LABEL. 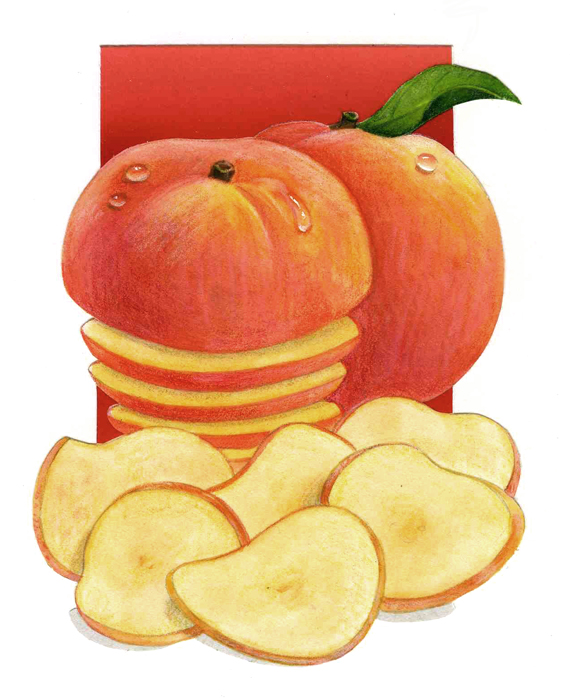 MY COLOR COMP FOR THE PEACH CHIP LABEL.

A PROMOTIONAL PAGE WITH AN ILLUSTRATION I DID OF MY OWN ILLUSTRATED PACKAGING. IT WAS CHALLENGING TO ILLUSTRATE THE GOLD PART.

There was also a comp that I created for Potato Chips; however, it never went to a final painting. 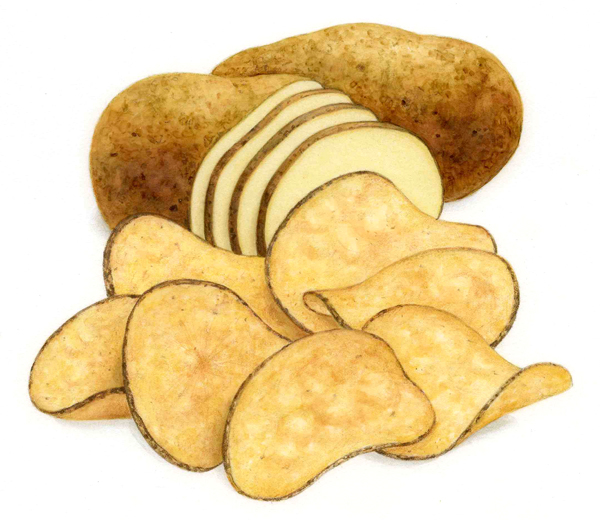 I LOVE ILLUSTRATING POTATO TEXTURE. THIS WAS A COLOR COMP FOR A POSSIBLE, POTATO CHIP LABEL.

I used to see these packages in the store for many years, however, since I haven’t in a long time, I’ve assumed the company is no longer in business. I fondly remember working for them over the years. I had a really nice rapport with the art director. Her name was Sachi – her studio’s name was Sawcheese Studio. Sachi had a very creative logo, because it incorporated a saw with a slice of cheese!

SUCH A CLEVER LOGO – I LOVE PUNS, SO I TRULY APPRECIATED IT!