#27 I STARTED OUT FLAKEY AND THEN I WENT NUTS

MY ILLUSTRATION FOR LAURA SCUDDER’S.

One of my early jobs was with a huge supermarket chain in Florida called Publix Supermarkets. I had excellent rapport with the art director, Warren. We have never met, but we began working together twenty-five years ago! I have continued to stay in touch with him. My last project for Publix involved illustrating yogurt labels. I have illustrated many yogurt labels for different companies; it’s probably because illustrating fruit is my specialty.

One of my very first projects for Publix involved illustrating their store brand of cereals. The job was actually billed to Ralston-Purina Company. This assignment helped me to learn a lot about improving my photography. I used white glue instead of milk to make the photos of the cereal look better.

I was very determined to get a correct ellipse the cereal bowls. There was a delicate pinstripe that needed to be accurate. I sized my illustrations to fit a large, plastic ellipse guide that I purchased. I cut frisket using the edge of the guide, to make it as perfect as possible. 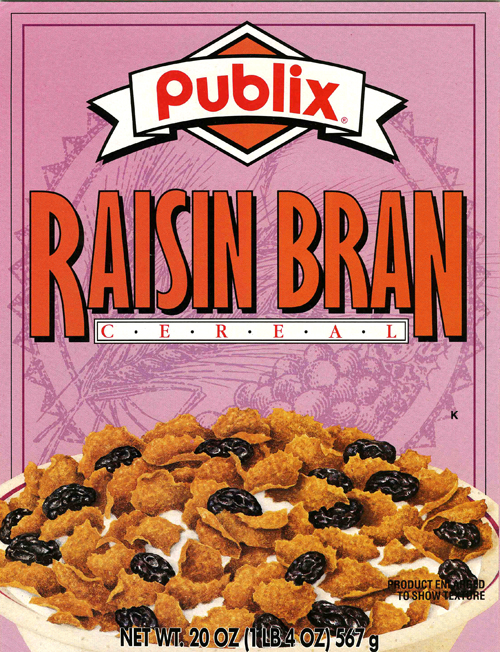 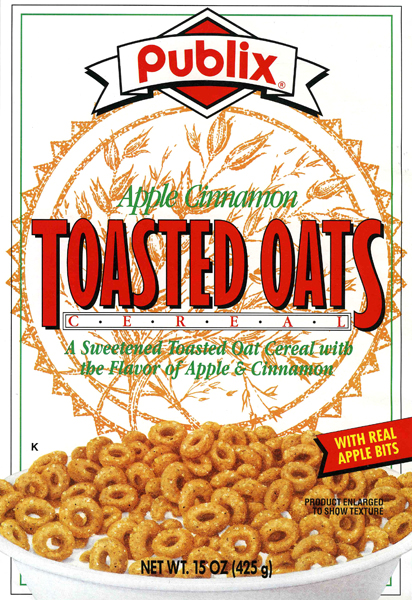 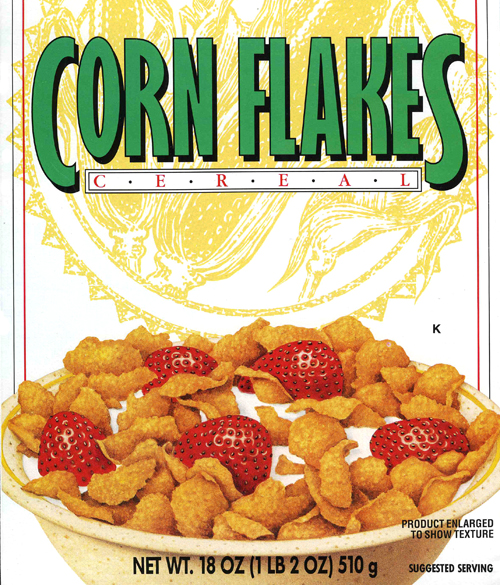 Although I haven’t illustrated anything recently for Publix, I did a lot of labels for them years ago. The next assignment after illustrating the cereal boxes were four, nut labels. It was quite tedious! Because it was faster, I decided to use my marker technique, instead of using watercolors as I had for the cereals.

Unfortunately, I hadn’t perfected my marker mounting technique yet. I had a lot of problems with the illustrations wrinkling. When I discovered a stronger mounting process, it made a huge difference and allowed me to continue using my marker technique for final illustrations. Warren noticed the wrinkling, but managed to use the illustration anyway. When I scanned my old transparencies, I took out those wrinkles!

One of my favorite textural solutions was creating the impression of salt on the nuts by gently spattering a little bit of white acrylic paint with a toothbrush!

A CLOSE UP OF THE MIXED NUTS LABEL THAT SHOWS THE “SPLATTER” THAT’S SUPPOSED TO BE SALT.

AN EXAMPLE OF MY PHOTO REFERENCE PASTED TOGETHER FOR THE CASHEW HALVES LABEL.

AN EXAMPLE OF MY LAYOUT FOR THE PUBLIX NUT LABELS. 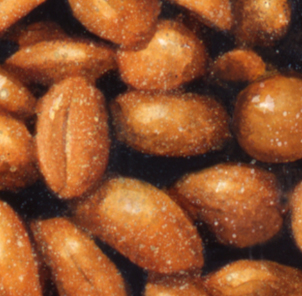 I THINK I MIGHT HAVE GOTTEN A LITTLE CARRIED AWAY SPLATTERING THE “SALT INDICATIONS!”

I have illustrated liqueur labels for two different companies, and plan to share more of those illustrations later on. I’ve included the ones that were almonds, since they fit into the heading of this post on “nuts.”

The two that I’m sharing below are actually quite similar, as the client liked my prior illustration and requested I illustrate theirs similarly – I simply added a leaf. I also used the digital painting process where I printed the illustration lightly and painted over it.

PRIOR TO USING THE COMPUTER, I FAXED LINE SKETCHES SUCH AS THIS FOR ALLEN’S LIQUEUR’S. 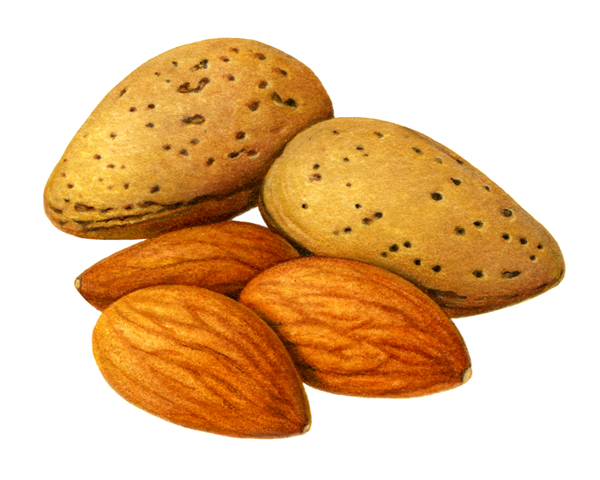 MY ALMOND ILLUSTRATION FOR ALLEN’S LIQUEURS

FINAL ILLUSTRATION FOR THE DU BOUCHETT LIQUEUR ILLUSTRATION. THIS STANDS OUT AS THE ONLY NUT ILLUSTRATION WHERE I WAS ABLE TO ADD WATER DROPLETS (WHICH I LOVE TO ADD!).

My last project was a series of labels that I did for Azar Nuts. By the time I did this project, I became very adept at creating the composition totally on the computer. I shot my reference and composed “photo montages” which I emailed to the art director.

Once my comp was approved, I created a very light version and printed it onto my watercolor paper. This process worked very well, and everyone was very happy with the results. Below is an example of the light print with the final painting progressing on the left side.

HERE IS AN EXAMPLE OF THE LIGHT PRINT AND THE FINAL PAINTING IN PROGRESS ON THE LEFT SIDE.

THIS IS THE FINAL PAINTING. I’VE ILLUSTRATED A LOT OF ALMONDS!

My digital process has also been self-taught. I compiled all the elements of my composition onto a “clipboard.” I have sometimes spent considerable time smoothing the edges of the compositional elements, so that they look less “cut out.” When I assembled everything, I learned to save a version of the layers without the shadows that are added on later. There was nothing more frustrating than going back to move a compositional element and find out there’s a shadow I’ve burned onto it!

Unifying all the elements to work together was an important part of this digital process for me. I still liked colors to reflect off each other. Having a consistent light source was also important for me. Painting over my light print was a terrific way to pull the illustration together for me. I guess I wasn’t ready to give up a paint brush completely! 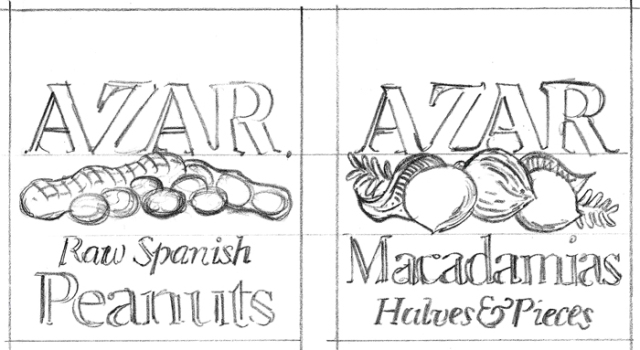 HERE’S A LOOK AT MY DIGITAL “CLIP-BOARD.” I USUALLY SMOOTH EDGES ONCE I DECIDE WHICH ELEMENTS I’M USING.

A DIGITAL “RECONFIGURATION” OF THE SAME PIECE FOR USE AS STOCK IMAGERY. 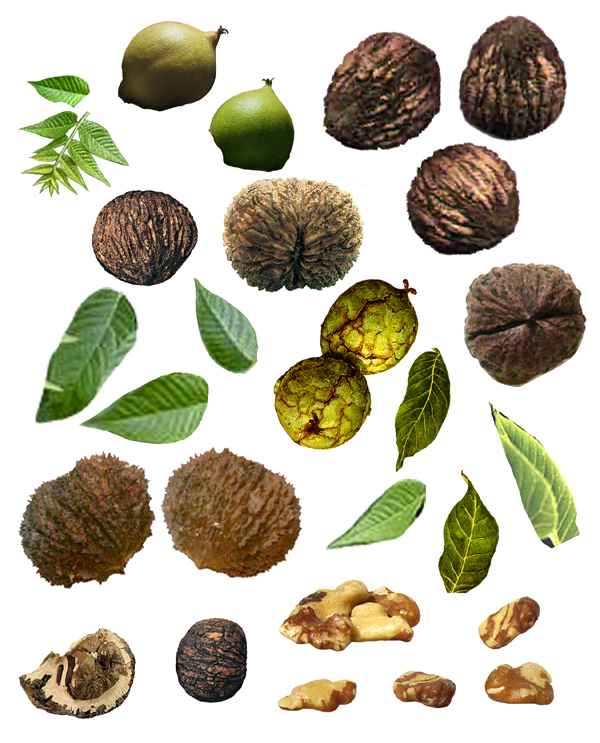 THE ART DIRECTOR WAS HELPFUL TO INDICATE WHAT POSITION HE WANTED THE ELEMENTS IN, ONCE HE NARROWED DOWN CHOICES FROM MANY LAYOUTS THAT I SENT. 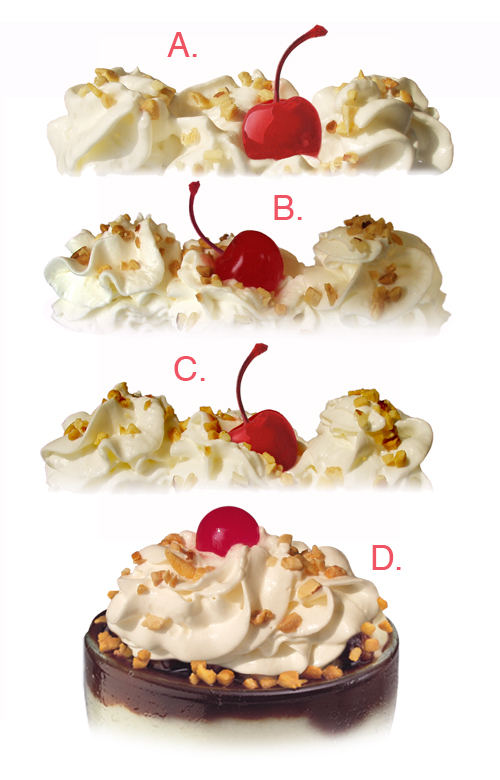 THE NUT TOPPING LABEL WAS CHALLENGING. THERE WERE MANY POSSIBILITIES AND THE ART DIRECTOR WASN’T CERTAIN WHAT WAS NEEDED AT FIRST. 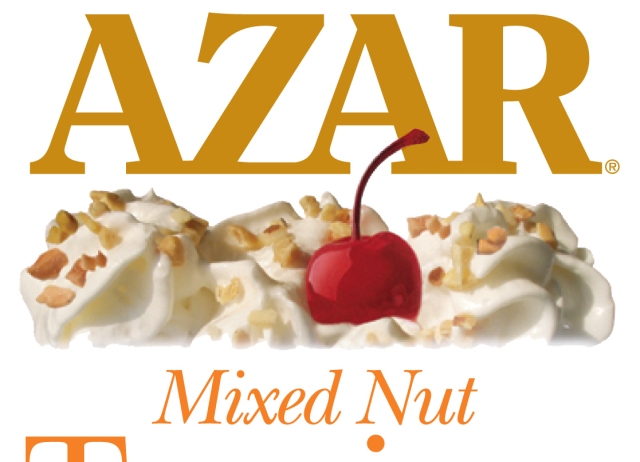 COMP FOR NUT TOPPING IN POSITION PRIOR TO PAINTING.

FINAL PAINTING. ILLUSTRATING SOMETHING WHITE IS ALWAYS CHALLENGING, BECAUSE IT IS EASY TO GO TOO DARK.

THIS IS MY ACTUAL, DIGITAL “PHOTO-COMP” PRIOR TO PAINTING. I PHOTOGRAPHED PINE NEEDLES FROM A NEIGHBORHOOD TREE!

I THINK THIS IS MY FAVORITE NUT LABEL.

MY FIRST VERSION OF WALNUTS, WITH THE NUTMEATS BEING “TOO SMOOTH.”

It was extremely easy when I had some revisions on the walnut illustration. The client wanted the walnuts to be “less smooth.” I simply painted new walnuts and digitally pasted them into the other versions. That saved me a lot of time!

FAR MORE REALISTIC WALNUTS THAT WERE “SCUFFED,” AS THE ART DIRECTOR DESCRIBED THEM.