#29 SOME UNUSUAL AND USUAL ILLUSTRATIONS – PART 1

I’ve been scanning illustration assignments and grouping them into categories. Some assignments that I’ve done have simply been weird! They defy any category.

Others are more typical if they involve food. What would be unusual is what the illustration was used for. Two assignments come to mind.

When I created an illustration of a burger for Griffin Financial Group, I thought that was definitely unusual. This was a one-time food illustration for them; there would be no return business! Below the tearsheet, I am sharing the marker comp. The art director’s comments were interesting, especially since prior illustrations on brochures probably never involved food. 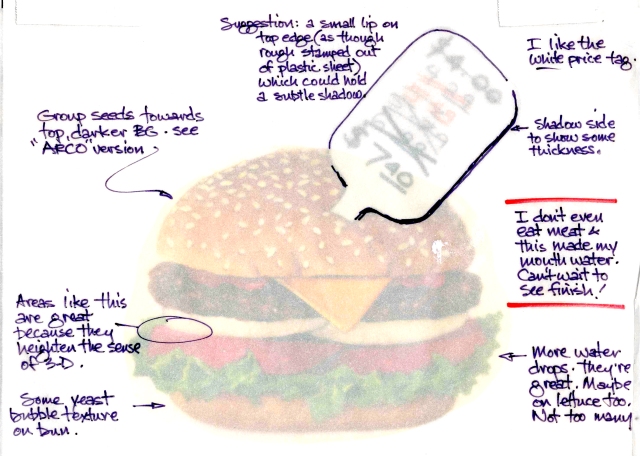 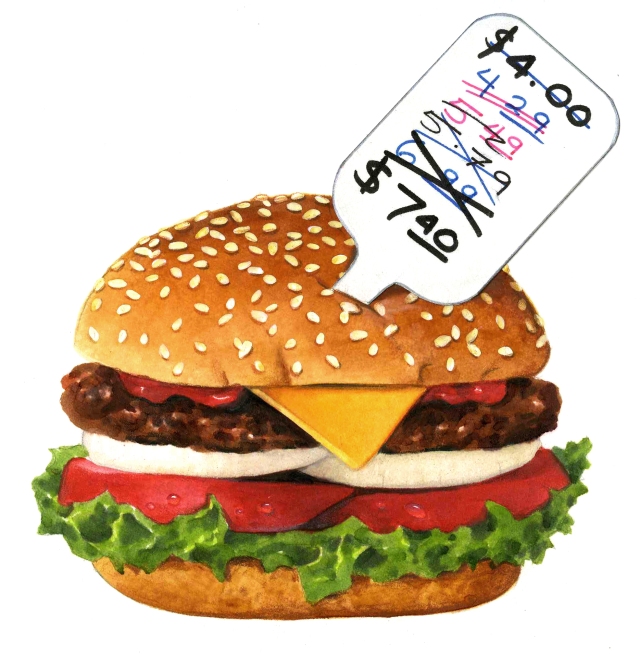 Just for fun, I am also sharing a portfolio painting of a burger that I did while I was still in college. I copied a photograph that was on a puzzle, and never felt great about the painting since I hadn’t used my own reference.

My illustration for Itel involved train cars hanging amidst cherries so that someone could “take their pick.” I was given photos of train cars that had to be illustrated following specific dimensions and layouts. Once again, I never thought I’d be illustrating train cars!

Since splashes are very difficult to photograph, it would not be that unusual to be asked to illustrate them. I must admit that I have intensely disliked illustrating splashes! As a watercolorist, there was little room for opacity and a lot of room for error. A lot of transparency and experimentation is needed to create the illusion of liquid in motion. The computer is an excellent tool for that, however, it wasn’t available at the time that I received some of those assignments.

The craziest splashes were for Orville Redenbacher’s “Reden-Budder” brand of popcorn. The worst part was incorporating lettering into the splash, because lettering was another element that I’ve never been crazy about illustrating either! On the example below, I only illustrated the butter splash, not the popcorn kernel. 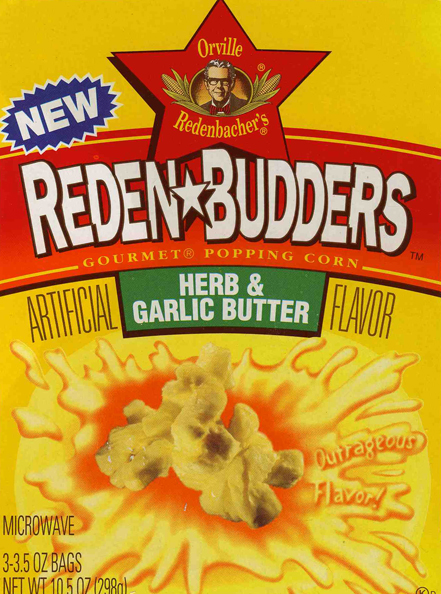 There were some splashes I illustrated, which I felt pleased with. Those were for Chiquita, and the illustrations were never used. Of the three illustrations I did, the juice that was most transparent was the strawberry, cherry, pink grapefruit flavor. The patterns within the splash are so abstract! 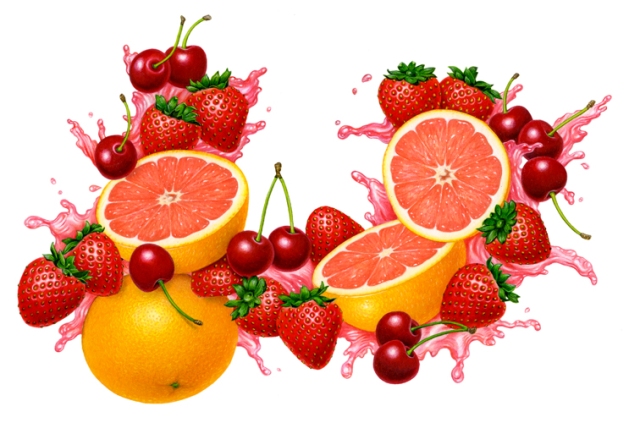 I was asked by Nabisco to illustrate one piece of shredded wheat. Rather than do an entire comp, I gave them swatches of color examples. I have one below, which I’m sharing.

I’ve included a layout that I did for Naked Juice products. This job never went to a final illustration. When I did the marker layout, my intuition told me I was dealing with a difficult client. I was asked to add vegetables into my illustration at the marker comp stage, even though I had already had a list of their ingredients and had done sketches. My photography was quite extensive on this project, and it was very upsetting to think of going back to add vegetables without compensation.

When directions are changed midstream during an assignment, an extra charge is considered fair. The budget for this assignment was very low, and they would certainly not compensate me. Therefore, I decided it wasn’t worth it to try to please them. This was very, very rare for me – however, I always follow my intuition. All of my work was not wasted, because I went on to complete a portfolio painting of a horizontal group of fruit, which I entitled “Fruit Stripe.”

Bristol Meyers had me illustrate a pill named Medipren; it was not a big seller. Strangely, watercolor and markers are not a precise medium for an illustration such as this. Airbrush would have made much more sense. However, my reps were good at promoting me, and my reliability made all the difference.

This job was memorable for me, because one word by an art director has stuck in my mind all these years. Art directors often give instructions using terms that are open to interpretation. I glanced at the art director’s notes to be sure that what he’d written was clear to me. I was told that when I illustrated this medication, it needed to be “ethical.” That was weird. I wasn’t sure what that meant I was supposed to do technically. The art director absolutely meant to use that word, and I’ve never forgotten that statement ever since!

In my first year as an illustrator, I received a very large assignment in Los Angeles. That was very rare for me. There were approximately twenty illustrations.

The assignment was for a line of products used in gardening. The agency was Van Noy Group, and the client was Garden Gear. Since I did best with organic imagery, I was a little perplexed about how to create the many geometric products and textures. Time was short and I ended up using markers for this entire line of illustrations. 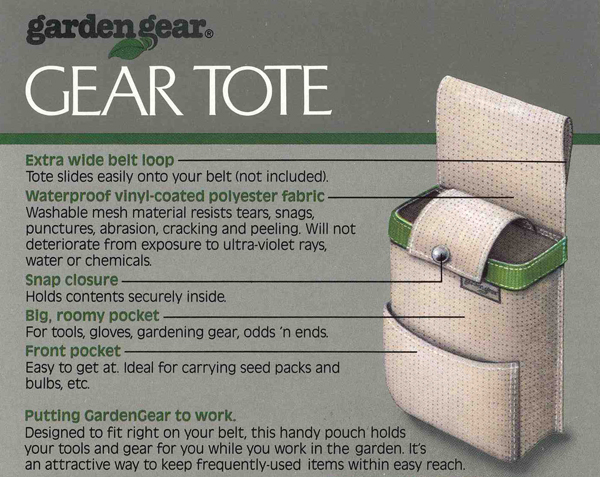 The agency was very happy with my work and sent me a nice note. This assignment reinforced my motto of “whatever works.” Early on, it became clear to me how important it was to improvise and experiment.

Expanding on the idea of improvisation would be my four illustrations for Budget Gourmet. I was under an incredibly tight deadline and once again had to use markers for this assignment. These illustrations were used as animatics for a commercial, and each one had to have a different tablecloth background. I was pleased that I was able to deliver these quickly!

I have never forgotten the adrenaline of trying to complete an assignment on a crazy deadline. I’ve never failed to meet a deadline.

Sometimes the only way to give myself enough time was to utilize couriers that gave me more time beyond the late afternoon required of Federal Express for a shipment. I remember driving to the airport to put my illustration on a plane at 4:00 a.m. My rep would pick it up at the other end and drive it to our client. Eventually, I found couriers that picked up from my door at 3:00 a.m. – the charge was often close to $200 and usually the client would absorb that cost. 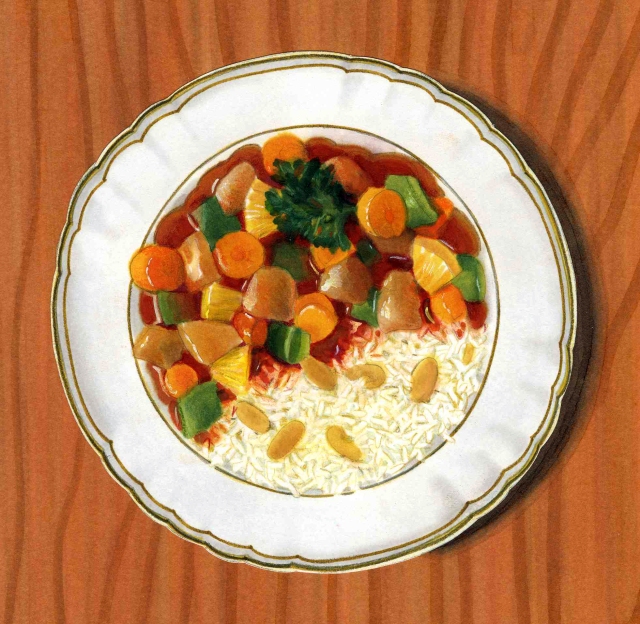 In a letter I’m sharing from my rep, she mentions that she wants to know about “Air Source.” That courier company received a lot of business from me!

I’ve included an assignment that I did for Chef Boyardee because I thought it was unusual that my illustration was combined with a photograph. I was used to illustrating photo-realistically, however, my painting needed to be incredibly real due to a photograph overlaying it. On this assignment, I illustrated the ingredients in the background and the photograph with the pasta on a fork was superimposed on top. 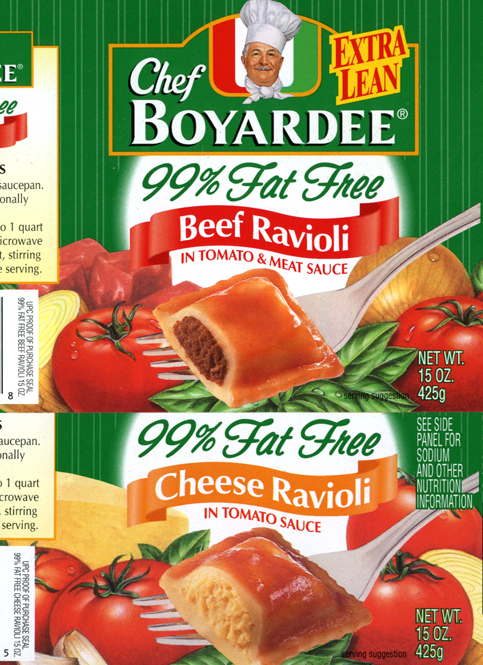 I’ve thrown in these fruit dinosaurs just for fun. Later on, I’ll share some fruit roll-ups I did for Betty Crocker. 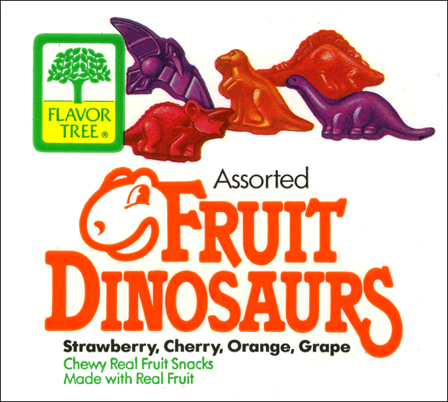 Another very strange job was an implantable contact lens illustrated against the background of a green leaf!

But by far, my weirdest job I’ve ever illustrated was a breast implant. How in the world did I ever receive an assignment such as this one you might ask?

Well, the art director told me that they saw my Coca Cola illustration with an ice cube sitting near the glass. The ice cube seemed to fulfill whatever expectation they had for me to illustrate that gel implant!

This assignment was quite difficult. I used markers and airbrush, and had no reference at all to work with. I was provided with some very strange looking photos, and had to imagine the gradation of color behind the implant. I was very glad when this job was over with! 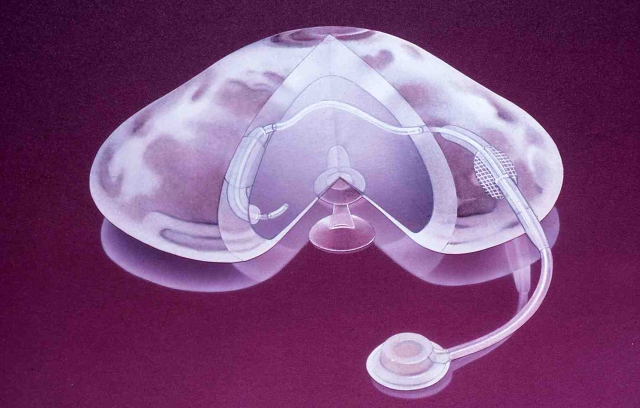