When I began working as a food illustrator in 1981, my biggest concern was how to prevent major changes to my watercolor illustrations. It was very stressful to meet tight deadlines and having to changes something afterwards was incredibly frustrating (if not almost impossible).

Other than cutting up my paintings, prevention became the key. I learned to create tight marker layouts that would give clients a close example of how the final art might look. I hoped without any surprises that my illustrations would be accepted. Even with a tight layout there were sometimes changes, but with anything major I was paid an additional fee.

I have to admit though, that honing swift marker technique skills was handy because it ended up working as a final technique in some instances.

The digital age has definitely made things easier for me. It is much faster and I’m able to create photo-comp layouts that clearly indicate how the final art will look. I still chuckle remembering when one of my clients said my layout looked like a hostage note! It was because I cut up photos with an exacto knife and glued everything together.

I save about 50% of the hours I used to spend painting my illustrations. Instead of tracing my photo reference and transferring the drawing to my watercolor paper, I print a very light rendition of my photo-comp layout onto Arch’s 140 lb. hot-press watercolor paper.

That becomes my under-painting. I work over my print as much as possible to reduce the chance of seeing any pixilation. Adding colored pencil and acrylic for texture and highlights helps with that, too.

If I don’t like one area on my painting, it’s very easy to begin again. I can also simply paint that area on another print and bring it into my final digital scan later on.

With a lot of experimentation, I’ve learned that the print values are very important. There has to be just enough detail without too much ink. The transparent dye washes look great as an overlay if the print is done correctly.

I own an Epson inkjet printer and printing on watercolor paper can be tricky. Many times, I’ve had my printer serviced because the paper wouldn’t feed into it.

Sometimes I’ve wondered, am I less of an artist because I am relying on the computer? I’ve decided to go back to my motto of “Whatever Works.” In the end, the fact that my clients are happy is my answer. I also appreciate the speed of this digital process. Finishing a project quickly allows me to have time for other things in my life!

Last year I worked on a project that clearly demonstrates this evolved technique of mine. So I’m going to share it here. 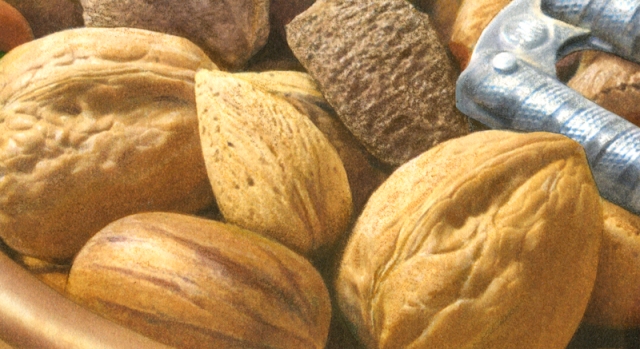 A close-up of my final painting.

When I received a seasonal packaging project for Diamond Nuts I had to promise I could meet a ridiculous 5-day deadline. After struggling to agree to that, the creative director congratulated me for being the artist chosen. Ironically, I was then left waiting and wondering when the project would begin. A week later, I checked in with the art director and was told, “The client isn’t sure your work is realistic enough.”

My illustrations for Azar Nuts were done in 2005. They were my first illustrations utilizing my digital print painting technique.

I sent off samples of nut illustrations I had done for Azar Nuts. A few days later, the project began and thankfully, the deadline was no longer five days! 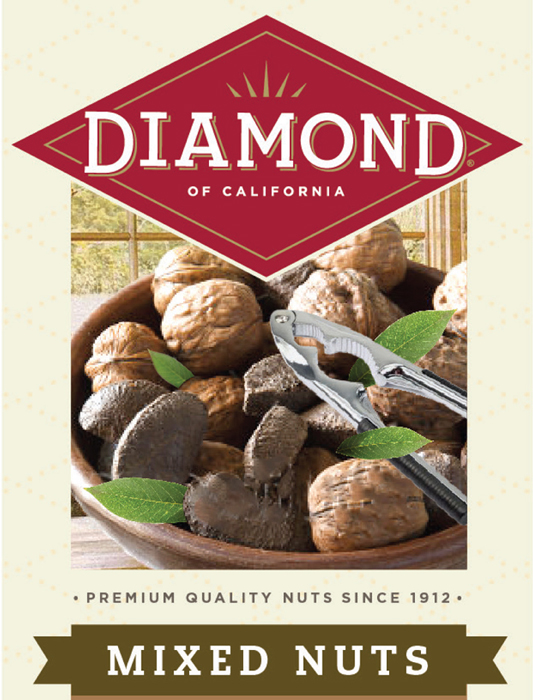 The client told me to carefully follow the approved a layout above. I would be painting two illustrations: Walnut and Mixed Nuts. The nuts were in a wooden bowl on a table with a window background. The leaves in the bowl looked awkward to me, but the art director said the client wanted them for additional color.

As always, gathering reference was my first step. It seemed simple to go buy the nuts, which were different from the assortment on my approved layout. After I went shopping, I had some questions.

I discovered that the pecans I purchased in separate bags of raw mixed nuts came in different colors. I sent the photo above to find out which pecan I was supposed to use. The art director responded by sending me an example of another type of pecan with striations. I was able to create them by digitally by altering the color and adding streaks to the pecans I had.

These were the ones the client wanted.

Finding a nutcracker and bowls was my next step. I went shopping and sent photo choices to the art director.

This shows how the nuts in the smaller wooden bowl became fewer and larger than my layout.

I found several wooden bowls, but they were significantly bigger or smaller than the one in my layout. After much searching, I decided I’d have to photograph the nuts in a different bowl of the correct size. I’d digitally insert my photo-reference into a wooden bowl later on.

This plastic bowl was just the right size for the nuts.

I purchased several nutcrackers but it turned out that the one I owned, (which was old and tarnished) was the winner. I thought it was an improvement over the one in the layout, which was also for cracking open seafood. 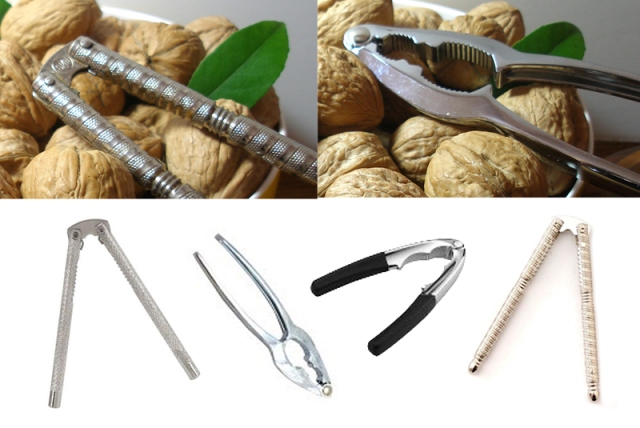 These were the nutcracker choices.

This is one of my layouts showing a shinier nutcracker. It came a week later because I ordered it from an online catalog. The client still preferred my older one.

There were five rounds of layouts and I also showed many different background choices. The layouts were cropped using a template overlay, but I made sure there was a lot of bleed for the final artwork.

Even though I worked with photo reference, I didn’t follow any one photo and added nuts where they might work better. I also inserted or removed leaves as necessary.

Lighting for my illustration was crucial. On the layout, the nut bowl was strongly lit from the background window on the left. When I shot my photo reference, I used a spotlight to create that same look. 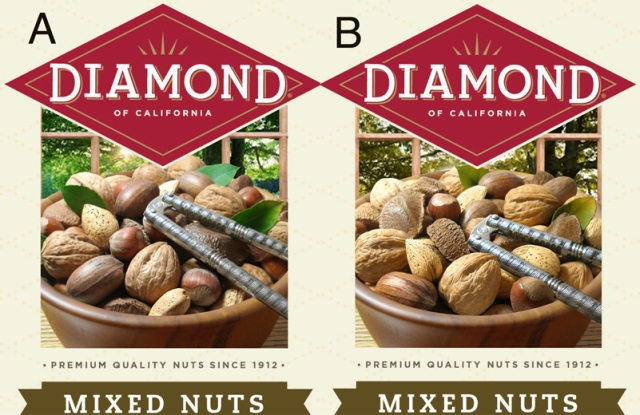 Because the illustrations were to be used on seasonal holiday packaging, the client wasn’t sure what background landscape they wanted. After sending images with snow, pine trees and fall colors – an autumn background was chosen.

These are examples of background choices.

While I was waiting for the window background to be decided upon, I actually began working on the final paintings for the nuts since they were already approved.

Once I had the best print to worth with, I lightly moistened the back and stapled it to a board. I kept a fully saturated reference photo next to me while I worked, as well as the real nuts.

In this example, the bowl had not been painted yet.

For my illustration, I used friskit (removable plastic film) and meticulously cut around each nut. The process of cutting the friskit with an exacto knife scored the paper. When paint reached those cuts, it created a delicate outline that I felt enhanced my illustration. 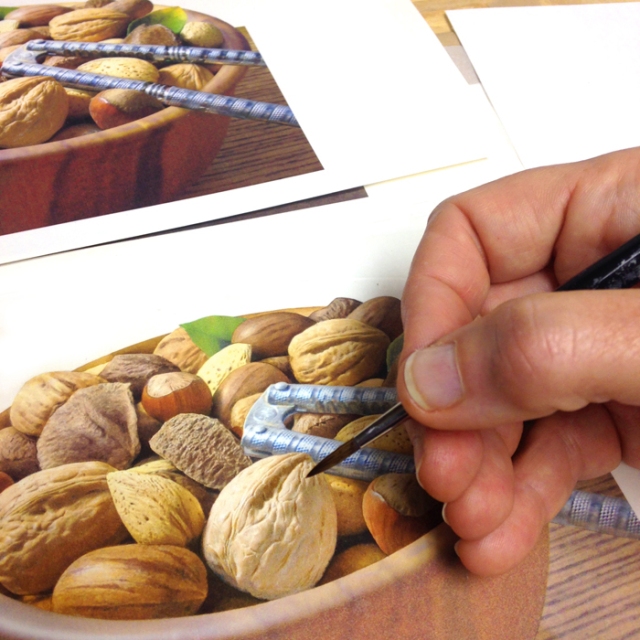 This example shows me painting one of the last nuts on my illustration.

Below are the final illustrations without the window background.

For the autumn background, my style was far less realistic. I painted and scanned the window frame separately so I could have more flexibility to shift the background in different ways. Below are the final illustrations with the background inserted.

I haven’t posted much for over a year to share technical information. Some of this is because my last two clients required me to sign non-disclosure agreements.

I’m glad I could describe my illustration process with my two Diamond Nut label illustrations. I’m even going to share a copy of my signed estimate (minus the agency information).

It’s been over a year since this job was completed and I never did see it on store shelves. I tried to contact the art director and she was no longer with the agency. Another designer told me it might never be reproduced.

That actually happens quite often in this business! 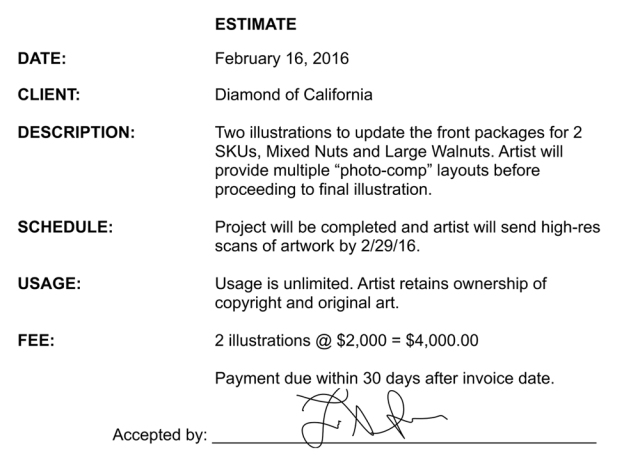